Visit with a French flavour 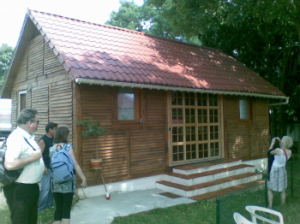 In July, Business Manager Malcolm Thorne and Operations Manager Chris Heaton took the opportunity to visit Paris with a group of staff from other UK communities. We were there to learn more about Emmaus in France  and the Worldwide Movement, with the intention of bringing back their best ideas, especially around bric-a brac, and clothes which we have recently begun taking.

The trip was a real eye-opener. There are 117 Communities in France giving a home to more than 4000 Companions, and 90% of France falls within the collection area of an Emmaus Van. 100,000 tonnes of goods are picked up every year for re-use and recycling.

We visited Emmaus Bougival, a Community founded in 1954 on an island in the Seine, located in a prosperous suburb to the West of Paris. Companions play a major part in the running of the business, which contributes 30% of its 2 million euro annual turnover to Solidarity projects. These include supplying furniture to destitute families, supporting projects to help people get free from debt, and sending shipping containers of donated goods to sister projects in Latin America and Africa.

We also went to Neuilly-Plaisance, where in 1949 Abbe Pierre took a desperate, homeless and suicidal ex-prisoner into his home and asked him to work to help those less fortunate than himself. This man, George, became the first Companion, and the house is now the centre of a thriving Community. They are currently pioneering a technique for building structures out of freight pallets in order to create affordable housing for the less well-off. A number of such buildings have already been constructed on site, including a house with two self-contained flats, built by the Companions who now live in it.

Other projects visited included Emmaus-operated, government-supported schemes for getting long term unemployed and dispossessed people back into work by collecting, sorting and recycling textiles, clothes and household goods, and selling them through a chain of shops in Paris.

The French have always been known for their civilised attitude to food, and at both the Communities we visited, we were able to enjoy simple but well cooked four course lunches in their dining halls which would put some of our restaurants to shame.

We returned to Bristol aware of just how far we have to travel, but inspired by the potential for the further development of Emmaus in Bristol and beyond.