Sleeping in a van 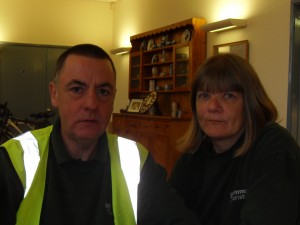 Richard and Sara are a married couple who have been with the Community in Bristol since mid-September.  Like many Companions, their route to Emmaus was the result of recession, family, financial and housing problems.

The couple were both employed with a local firm that went into liquidation and as a result of losing their jobs, mortgage arrears built up to a point where repossession became inevitable.

Homelessness for the couple, married for over six years, was a mixture of staying with friends, rented rooms and live-in accommodation when they both found work.  Richard became a trainee bus driver and Sara a cleaner for a public house.  Through circumstances over which they had no control, these options became fewer and fewer until they were forced to sleep in their van rather than at a local night shelter.  After Sara had lost her job when the landlord moved to other premises, Richard became so depressed and worried about their ‘No fixed abode’ status and maintaining a good level of personal hygiene, that he gave up his bus driving work.

Richard says, ‘These were really dark times for us, and I became clinically depressed.  I worried I wasn’t providing for my wife and that for me made things seem twice as bad.’

He goes on to explain their struggle to find accommodation; ‘We tried every avenue we could think of, but as a couple with no dependent children we were low priority for council housing.  After that we looked into the YMCA and were offered hostel rooms, but after hearing bad things about the hostels I wasn’t prepared to put my wife’s welfare at any further risk and we had to sleep in the van.’

A meeting at the Job centre to start the signing on process proved to be a turning point for Richard and Sara when going through accommodation options yet again. Their interviewer mentioned Emmaus, and although he didn’t know about the charity Richard called and was invited for a chat and something to eat at the Community.  Richard wasn’t very hopeful; ‘We were told not to get our hopes up as generally Emmaus Bristol doesn’t take couples but we felt we had nothing left to lose and it might open other doors for us, so along we went.’  It seemed to go well, since the Support Team and Community Manager Dave Perry set out to see if any other Emmaus Communities were able to take the couple.  Eventually Dave decided to offer a temporary place at Emmaus Bristol and they have thrived on the opportunity they were given.

Speaking of his relief, Richard says ‘In our short time staying here we have been made to feel very welcome and fitted in perfectly with the Community. We enjoy our work and eventually I would like to become a staff member in any Emmaus Community so that I might help with some of the great work that goes on here.’  The couple are very impressed with Emmaus and say it is ‘A fantastic approach to the issues of homelessness, giving a breathing space when most needed.  The support encourages you to pursue goals and look forward to the future. We also feel frustrated that Emmaus is not better known in this country but hope that the organisation will grow both in its capacity to help the homeless and marginalised, and its public profile.’

Richard and Sara are certainly doing their part within Emmaus Bristol to make this wish a reality.