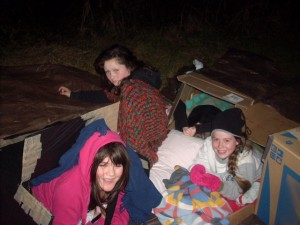 At the beginning of October, Emmaus Bristol was amazed and delighted to receive a cheque for £662 from the 2nd Filton (St Peter’s) Guide Company, raised through their sponsored sleep-in-a-box at the end of September.  This year being the Centenary of Girl guiding in the UK, the group had been asked to support charities to change the world – and chose Emmaus as the homeless charity they would donate to.  The guides were only allowed to take blankets with them and the evening started off with soup and rolls. They then played games in the dark on the campsite before retiring into their boxes for the night. In the morning before they went home it was bacon butties all round!