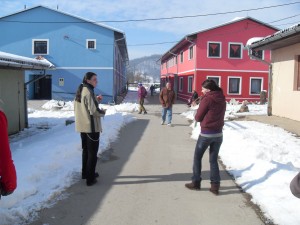 Our first visit was to the HQ and accommodation centre in Duje (doo-yuh), near Tuzla where up to 450 Companions live, including homeless, physically or mentally disabled, elderly and other marginalised people.  The range of facilities offered in this larger than life place are truly amazing considering the resources they have to work with.  Health care is comprehensive, with a team consisting of two doctors, medical technicians, physiotherapists, social workers and associated support.  Other treatments offered include art and writing therapy, arts and craft manufacture, as well as work helping in the diverse mini-industries that help keep the facility supported.  Underneath one of the accommodation blocks the basement was undergoing renovation to make space for the cultivation of mushrooms!  Also on site was a cheese factory making seven different types of cheese for sale to local wholesalers and a large area of land was being cultivated for crop production, including several huge glasshouses and polytunnels.

In the evening we met some ten or so victims of human trafficking who were being accommodated in a safe house whilst they undergo rehabilitation, education or preparation for appearing as witnesses in trafficking prosecutions.  Everything these people do has to be monitored for their own safety; it is not unheard of for them to have to leave the safe house at very short notice after their location has been discovered.

The next day we learnt about the expansion plans for the area in a town devastated by the genocide of 1995.

A new kitchen and outbuildings are planned (the building materials for these all ready for the summer camp later this year) and the land around the Emmaus office in Srebrenica is to be turned over to the cultivation of crops.  We also travelled to some higher ground to view the outlying mountainous areas, where the history of recent and past years was explained to give us a picture of why the services of Emmaus are so badly needed in this area.  Basically the population of Srebrenica was cut by two thirds by the events of 1995 and their consequences.

Another large project starting was a campaign to highlight the dangers of child sexual abuse over the internet, with Emmaus working with government agencies to develop strategies and laws to counter this.  In the afternoon, we had a guided tour of the old city with its Ottoman Empire influences, the city’s museum and a magnificent panoramic view of the city from the tallest building in Sarajevo.

This trip was a fascinating insight into a country only recently ravaged by war, and the consequences that war has brought upon its people.   We were moved by the humanity, commitment and passion of the people we met, who dearly love their country and are struggling to make a difference according to a founding principle of Emmaus; to serve first those who suffer the most.

Chris hopes to return to Bosnia later in the year to help with their summer camp.