“Ready to change yourself”- one Companion’s journey. 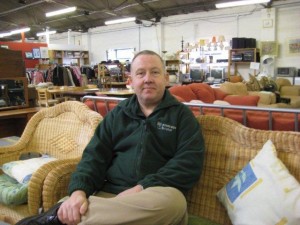 Let’s go back in time to 1.30pm on 8th October 2003.  A man comes to the door of Emmaus Bristol.  After a 10-year career in catering in the RAF, his life in the Services had come to an end.  Our man worked in a hotel in North Bristol.  After a while things went wrong and he found himself sofa-surfing and living on the street on and off for 2 years.  One day he heard someone mention that Emmaus Bristol was about to open.  This is when Nigel knocked on the door – and the rest is history!

Initially, he thought his stay would be temporary and he would soon be moving on. In the meantime, Emmaus Bristol was somewhere safe. Nigel started cooking for the Community, since it was his skill.  Then he decided to stop smoking and drinking, thus saving a substantial amount of money – which enabled him to do things he hadn’t been able to afford before, like a canal holiday in France, going on a cruise and on a tour in Italy.  Meanwhile, Nigel’s cooperative and willing attitude enabled him to rise through the ranks.  He became a “Responsible Companion” first, then “Community Assistant” and “Assistant Retail Manager” and now “RETAIL MANAGER” – that is, a paid member of staff.  Nigel gradually became aware that he would like his life to take another positive turn and two weeks ago, having occupied the Manager’s flat at the Community for several years, he moved into independent private rented accommodation.  “As good as it has been to live in Community, I thought I was at the right stage of development to do it”.

How is life different?  “Well, I can’t go downstairs to see people but I can still enjoy listening to music, reading, fishing and cycling – in fair weather only!”

Looking back Nigel talks about an eye-opening time.  “Emmaus is a life-changing experience for everyone – and it is amazing to see how people change.  Some get married and have children.  Some go back to independent life.  It doesn’t matter what stage you’re at.  There is always someone ready to help.  Of course, you have to be ready to change yourself!

“There have been difficult times too, particularly when one of our Companions died.  You have to come to terms with it both personally and as a Community.”

What works about Emmaus? “Well, everybody has to put something in to make it work and help others.  It’s a fantastic concept, thanks to Abbe Pierre.