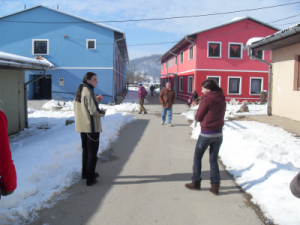 Is the middle of winter the best time to visit Bosnia?  Most certainly, as  two Companions from Bristol and Oxford discovered when they visited the country to investigate the work of Emmaus’s  International Forum of Solidarity™, (IFS) this February.

In response to an open invitation from the people in Bosnia, I (Chris, Bristol) and Robert (Oxford) flew to Bosnia with very little idea of the few days planned for us. We arrived in the middle of the night and settled down before a breakfast meeting in the morning to discuss the plans laid out for us.  In short we were to tour the main sites of operations and learn of the work being carried out and the history of the Emmaus-IFS movement in Bosnia.

Our first port of call was the headquarters and accommodation centre in Duje (doo-yeh), near Tuzla.  Here there is accommodation for up to 450 Companions including homeless, physically or mentally disabled, elderly and other marginalised people.  The range of facilities offered in this larger than life place is truly amazing.  Health care is comprehensive, with a team consisting of 2 doctors, medical technicians, physiotherapists, social workers and associated support.  Other treatments offered include art and writing therapy, arts and craft manufacture, as well as work helping in the many and diverse mini-industries that help keep the facility supported.  Companions are accommodated according to gender and social and medical need.  After seeing the accommodation blocks we commented how much like an old hospital they were, although the Companions seemed very comfortable and happy there. One measure of success can be found in the touching story of one Companion who was amazingly reunited with his father after 21 years of separation due to the efforts of the people at Duje.

No space is wasted here, as underneath one of the two newest accommodation blocks the basement was undergoing renovation to allow a large space for the cultivation of mushrooms. On site is a cheese factory making seven different types of cheese for sale to local wholesalers.  In the past, the milk was produced on-site, but now they source milk from the surrounding dairy farms.  This is not such a backward step as it might first appear.  By buying the raw material in this way overheads are kept low and commerce between neighbours only strengthens the bond between Emmaus and the wider community.  Future plans for the cheese factory included a wider range of cheese (those produced here are all full fat) and different grades of milk and yoghurt.  Without funding, however, this may remain a dream as capital outlay needed for the venture to become reality would be in the region of £250,000.

Adjacent to the factory, a large area of land was being cultivated for crop production, including several huge glasshouses and polytunnels.  Interestingly only the cheese factory is allowed by law to sell its products as it is a business in its own right, subject to taxes.  The crop production is part of the collective and so its produce is either bartered or exchanged for other goods and the Staff also buy a little. It would seem to the casual observer that the camp wants for little.  We realised that this is not the case as we bore witness to the attempts by the Companions to launder and dry their clothes outdoors in (very!) below freezing temperatures, all over the facility.

Later in the afternoon we were shown around the town of Tuzla before a lovely Bosnian evening meal and one of the more poignant parts of our trip.  We met, for an hour, some ten or so victims of human trafficking who were being accommodated in a safe house whilst they undergo rehabilitation, education or preparation for appearing as witnesses in trafficking prosecutions.  Everything these people do has to be monitored for their own safety;   No TV, radio or newspapers without prior screening, no excursions outside the building.  It is not unheard of for them to have to leave the safe house at very short notice after their location has been discovered. This isn’t for the short term; these people are often there for at least two years and the problems they face along the way are far too varied and complicated to be covered here.  If any readers would like to know more, please click on the link at the end of this piece.

The next day we were taken to the office in Srebrenica where we spent time learning of the expansion plans for the area in a town devastated by the genocide of 1995. A new kitchen and outbuildings are planned, the building materials for these all ready for the summer camp later this year.  Also planned for this year is to turn the land around the office over to the cultivation of crops.  The morning also provided the opportunity to go to some higher ground to view the outlying mountainous areas, where the history of recent and past years was explained to give us a picture of why the services of Emmaus are so badly needed in this area.  Basically the population of Srebrenica was to cut to a third because of the events of 1995 and its consequences.

In the afternoon we were given a rare private tour of the memorial site dedicated to the victims of the genocide and shown a documentary exclusive to the memorial which went a long way to explain the difficulties this area is experiencing due to the dreadful events of that time.  Alone and privileged to observe this area on such a personal level, I found it difficult to comprehend the thousands of people crammed for two days and nights into what had been a battery factory and was (during the war) the Dutch UN force’s Headquarters, while thousands more pushed and shoved outside, pleading for sanctuary.  In a cruel twist, those inside benefited from only a postponement of their fate and were released to the awaiting Serbian forces.  Even today, forensic tests continue to be carried out in an effort to identify victims so that what remains of their families may lay them to rest. Our final day was more relaxed with a trip to Sarajevo and the office there.  More of the diverse work being done was explained to us.  One large project starting was a campaign to highlight the dangers of child sexual abuse over the internet, with Emmaus working with government agencies to develop strategies and laws to counter this.  Following on we had a guided tour of the old city with its Ottoman Empire influences, the city’s museum and a magnificent panoramic view of the city from the tallest building in Sarajevo.

In all, this trip was a fascinating, as well as humbling, insight into a country only recently ravaged by war, and the consequences that war had brought upon its people.   However, we both felt so much humanity, commitment and passion from our hosts, people who dearly love their country and are valiantly struggling to make a difference according to a founding principle of Emmaus; to serve first those who suffer the most.  Thanks are inadequate to these people for sharing their work with us; I will be more than happy to help with their summer camp.

Please visit www.mfs-emmaus.ba and click on the Union Flag for an English version, for a comprehensive in-depth view of the work being done in Bosnia….