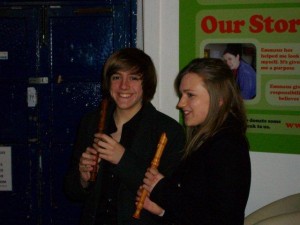 The concert, generously given in aid of Emmaus Bristol by the Blockflute Band and Bristowe Consort took place on Friday 11th March in the retail area at Barton Manor.
As a late comer, I arrived to find that the audience were comfortably ensconced in 3 piece suites which had been on sale earlier in the day and were now arranged in concentric rows, expectantly facing a group of about 20 musicians. Having (more or less) mastered the descant recorder at school, I was amazed at the range of shapes and sizes of recorder on view, from diminutive sopranino to higher-than-head-height contrabass. After a brief introduction from Dick Little, the Band’s conductor, we were treated to a fascinating variety of musical periods and styles, ranging from medieval tunes from the 12th century, through works from the 16th and 17th century, to seductive tangos and a quirky composition representing life in a Public Hospital (complete with ambulance siren!) The versatility of players and the quality of the sound they produced was a revelation to those in the audience who associated recorders with “Grass so green” and discordant squeaks! The experience was complemented by bravura performances from Jacob Warn and Naomi Bullivant (see photo), both members of the National Youth Recorder Orchestra – and by the excellent refreshments provided by the Companions, including contrabass-sized slices of cake prepared by self-taught Companion chef Terry.

The anticipate that the evening will have raised around £450 and we hope that many in the audience who were visiting Barton Manor for the first time will be back to enjoy the friendly atmosphere and explore the varied and constantly changing goods on offer.

Thanks to all who helped to make the evening such a success!